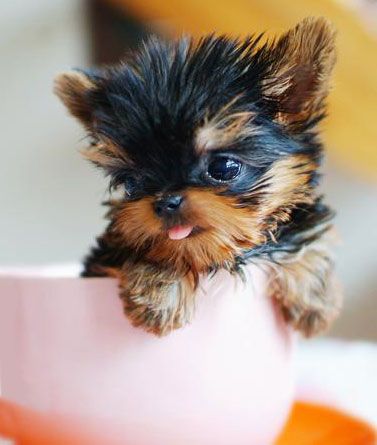 Know the facts behind the “Teacup Puppy” buzz, before jumping into ownership of these pint-sized puppers!

Teacup puppies are a bit of an anomaly, but we’d argue the cutest ones! You’ve certainly seen them and they’ve been popularized by celebrities worldwide. Allow us to shed some light on teacup puppies. Can’t wait to see our adorable puppies, just click here!

What are teacup puppies?

The term teacup is the unofficial name associated with extremely small dogs. These dogs can actually fit in a teacup (as puppies)! You may also hear them being referred to as toy dogs or micro dogs. The term is used to describe the size of a tiny puppy. Teacup puppies can be the result of intentional and unintentional breeding and some are runts of the litter. The teacup puppy is not a breed. The term simply references and describes the size of the dog. That’s it!

What is the size of teacup puppies?

If a dog is considered a teacup, this means their size will typically range from 3 to 4 pounds, at its full grown weight. If the dog is considered micro, they will usually weigh between 2 to 3 pounds at its full grown weight and age. There is no universal or mandatory size, since teacups are not an official breed and are not regulated. Other times, teacup puppies are the result of breeding two very small dogs of a certain breed.

What breeds are known to be teacups?

The most popular teacup dogs are:

What are the health concerns for teacup puppies?

There’s certainly been some controversy surrounding the health of teacup puppies. Many people believe that they are unhealthy, however that is not necessarily the case. This particularly applies to teacups who have been bred irresponsibly. They may experience numerous problems, as with any dog, but truly the thing to be watchful for is making sure they don’t get injured accidentally or don’t eat enough throughout the day. If the teacup puppy has been bred from a healthy line, and from a line that specifically breeds dogs to be small, then they can most assuredly be equally as healthy as any other size dog. Still, though they can lead healthy lives, they do have some common concerns. Most revolve around their extra small organs and subsequent birth complications. Their tiny bladders will make potty training a little more difficult, but at least they’ll leave drops and not puddles!

If you’re interested in learning more, our Petland Mall of Georgia staff are available field your questions anytime!