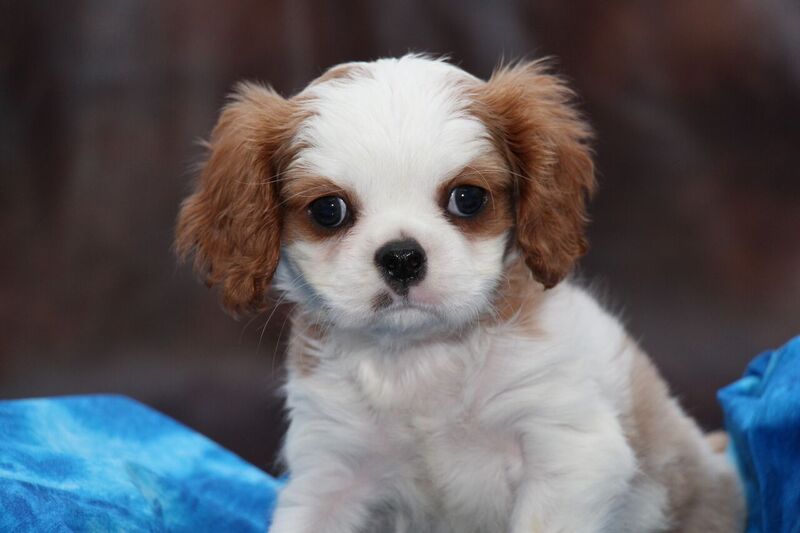 Welcome to our fourth installment in our “all about dogs” breed series! This blog will be about the very majestic Cavalier King Charles Spaniel! With their sweet disposition and adorable big brown eyes, it’s easy to see why this breed has been captivating hearts since the 1500s. But few know about their long and storied histories! Here at Petland, we always have Cavalier puppies for sale!

1. The Cavalier is Known as “The Comforter Spaniel”

This breed loves nothing more than to cuddle with their beloved owners. Being bred as the consummate lap dog, they are widely known for their friendliness and affection. They bond with their owners very strongly, making it difficult for people that are away from home often to do well with this breed. Otherwise, this playful breed is perfect for families and children alike.

2. Why is the Name so Long? How the Cavalier King Charles Breed Evolved

The Cavalier started out as just a toy spaniel in the 16th and 17th century. Then after garnering the love of King Charles II, they were named after their most famous owner. Because King Charles was sometimes accused of neglecting the kingdom in favor of his beloved dogs, he was dubbed the “Cavalier King”. The name then stuck with the spaniel as well!

3. The Cavalier and the Pug. Wait, what?

4. The Colors of the Cavalier Also Have History

Cavalier King Charles Spaniels have four very distinct colors with very special names! The most popular is Blenheim, chestnut and white, that was named after the battle of the Blenheim where a famous breeder of the Cavalier fought. The other colors include King Charles (black and tan), Ruby (mahogany) and Prince Charles (tri-color).

5. The AKC Was a Little Slow Recognizing the Cavalier King Charles

Even though the origins of the Cavalier date back centuries, the AKC only formally recognized the breed in 1995. Since then it has grown in popularity by leaps and bounds. The Cavalier was rated 18th in the country just last year and should continue to gain admiration. Despite being a spaniel, the AKC puts the Cavalier in the Toy Group in shows because of their diminutive size.

We hope you enjoyed this little bit of background into the awesome breed that is the Cavalier! Because the Cavalier is so popular, we try to have this breed in our store at all times, check out available puppies to see Cavalier puppies for sale!

The Cavalier King Charles Spaniel is such a great breed for so many different types of people and our Pet Counselors have no problem letting you know if this breed is best for you. We encourage our customers to play and interact with our puppies before they make the big decision to take them home. So stop by today if you think a Cavalier might be a great addition to your family! Want to know more about the breed? Check out our breed info page!