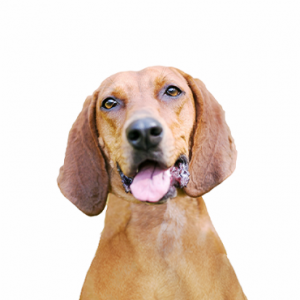 The American Redbone Coonhound is a breed of dog that was bred specifically for hunting cougars, bears, raccoons, and deer. The Redbone is an alluring handsome dog breed that registers a high level of appeal with the American Kennel community. Discover more about our Redbone Coonhound puppies for sale below!

Dogs like the Bloodhound, Beagle, Welsh hound, English Foxhound and Harrier were among these. Sometimes, these dogs were used for Foxhunting. Later on, selective breeding was done by Southerners to create dogs that possessed high levels of stamina, that could hound their prey tirelessly and unhindered till they were cornered.

The red-colored foxhounds imported by Scottish immigrants formed the pivotal base of the breeding of Redbones. Afterward, in 1840 an addition was made to the bloodline through Irish-bred Bloodhound and Foxhound.

The Redbone Coonhound has a very strong will to please its master. They’re very gentle and full of affection; However, they can be very distinct with their loud “drawling barks.” This “drawling bark” is usually referred to as a Bay.

Puppies and adolescents are often very active. In the absence of physical training or activity, they tend to Snoop around trash cans, destroy furniture and shoes by chewing them. The Redbone Coonhound can be stubborn and sensitive at the same time, so it’s important to avoid treating them harshly during training. Once they’ve reached their full potential, they can easily jump into a pool of water to play with children.

The ideal environment for training a Coonhound should be in a fenced area, this prevents the hound from wandering off and getting lost. The Suburbs or country is a convenient environment for the development of Coonhounds. Urban settings usually pose more obstacles, but that can be compensated for through regular daily exercise.

The Redbone Coonhound needs a daily exercise regimen of walking for an hour or an hour and a half. Swimming is also a good exercise regimen. The bulk of their exercise regimen comes from hunting for prey, However, great care should be taken to prevent the dog from wandering far from its master, as they are often adept to the pursuit of prey and seldom fail to heed the calls of its master.

The Redbone Coonhound has a unique hound odor. They’re required to take baths regularly to lockdown this unique odor. Regular grooming like brushing their short smooth coats weekly is required. They don’t shed a lot, so this is a plus for its owner. They have long ears, so an owner must ensure that areas “in and around” the ears are cleaned properly. Owners must endeavor to groom their nails to prevent tears and splitting.

The unregulated breeders who are selling outside of the USDA regulations and without a license are what we consider to be “Puppy Mills.” We are committed to offering Redbone Coonhounds puppies who will grow up to become important members of your family. We only purchase puppies from the very best sources, and we stand behind every puppy we sell.

A large number of Redbone Coonhounds are natural swimmers and love swimming. Their swimming abilities are further enhanced by their webbed. Although they love swimming, great care and supervision must be adhered to when they’re in the water.

The Redbone Coonhounds are descendants of Bloodhounds, Foxhounds and there is a high probability that they’re Irish hounds’ descendants. A pioneer who put in a lot of work to breed the Redbone was George E.L. Birdsong.

Redbone Coonhounds are from the United States of America.

Quite the contrary, Redbone Coonhounds are very easy to train. Their tendency to bond well with the family, to be gifted, loyal and loving makes them quite easy to train. Some stubborn traits might creep up sometimes when it does, the owner should recognize that this is not the usual behavior associated with them. They must endeavor to provide the dog with love and care and not speak to them harshly.

Redbone Coonhounds are highly energetic, they’re primarily bred for chasing prey. This makes them whine when they’re lacking physical activity, they whine in order to get attention from their owners.

When this happens, it is advised that you don’t give it the attention it needs by yelling to it to “keep quiet.” What you’re required to do is to instruct it to perform a small physical activity, this action deescalates the situation while imparting knowledge on the hound

They’re excellent retrievers, so they are used for hunting, Cougar, Raccoon, Deer, and Bear.

Unless they’re well trained, Coonhounds don’t bode well as leashed dogs. They can be stubborn, still, that doesn’t take anything away from their smartness.

The average lifespan of a Redbone Coonhound is 11-12 years.

Redbone Coonhounds bond well with children, they are very affectionate companions. Although they possess these traits, they’re naturally born to track and hunt. So, around the house, you might notice them chasing after rats and smaller animals.

Yes! Redbone Coonhounds are very loyal, this is greatly enhanced through training.

Redbone Coonhounds are highly loyal, gentled mannered dog breeds. They’re excellent hunters and can be used to track prey. As pups, Redbones tend to be stubborn, so great care should be taken to avoid treating them harshly or screaming at them.