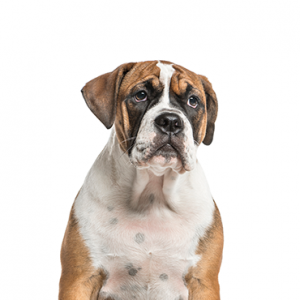 If you’ve ever wanted a dog with the charisma of a bulldog and the looks of a beagle, the Beabull will surely exceed your expectations. Discover more about our Beabull puppies for sale below!

This dog is pretty as a picture and has the same loving and caring attributes as its parents not forgetting the strong and independent trait of its English counterpart, the English Bulldog. With most mixed breeds comes a great uncertainty about which parent the offspring will inherit most of its traits. To find out which one the Beabull takes after, keep reading!

Now with designer dogs or ‘mixed breeds’, if you wish, their origin story may not usually be forthcoming. Besides legends like Labradoodles, most of these designer breeds do not have a concise origin story and the Beabull is an example of such. However, with respect to the demand for mixed breed dogs, one would say the Beabull’s origin dates back to about 30-40 years ago.

This timing should be accurate considering the Beabull up till date isn’t considered by the American Kennel Club. Now as you know the Beagle and the English Bulldogs are both purebreds. They are distinct in all their traits, temperament, appearance and physical abilities.

Hence, making a hybrid from two purebreds is like striking a doggy goldmine but instead of gold, you have litters of cuteness. In terms of percentage, this fusion is a half and half. However, this could differ depending on the level of generational crossing which could be Beabull and Beabull or Beabull with either of the parent breeds.

The Beagle part of the Beabull makes them in complete awe of their human owners. They absolutely love their company and always try to be in their good books. They are submissive and lively creatures who show a lot of devotion to their owners.

Beagles are happy-go-lucky dogs hence, the Beabull will have similar traits. On the other hand, their English Bulldog heritage gives them a sense of assertion. It equips them with the attitude they require when defending their territories or when protecting their owners.

All in all, the Beabull is a highly affectionate breed with a streak of charisma. They are great family dogs.

These dogs mostly thrive in apartment buildings and suburban homes. Some Beabulls inherit a greater part of the Beagle’s double coat and this helps them adapt better to diverse temperatures and protects them as well.

They can stay without their owners for a while without being destructive too. They are very cute dogs and usually charm their way up despite wherever they find themselves. The Beabull hybrid isn’t hypoallergenic in any way and all they need is an environment basked in love, affection, and cuddles.

Also, this breed comes power-packed with energy hence, owners will have to indulge the hybrid in dog exercises.

The Beabull is an energetic breed. They have high playfulness tendencies and can tend to wear their owners out. They love running, walking and playing fetch. You will need to keep them preoccupied with these dog exercises for a minimum of an hour each day just so they can stay happy for the rest of the day.

They do not have intense workout needs neither do they get destructive or mouthy when they do not receive certain amounts of exercise.

Neither of the Beabull’s parent dogs is large hence you can expect the Beabull to be a small-sized dog. This makes its grooming a lot easier. During the spring and fall seasons, they shed a lot of fur and owners may need to increase their brush frequency to 3-4 times a week.

To make things easier, you can remove a lot of loose fur off your Beabull’s body by running a vacuum cleaner on its coat. The Beabull inherits the Beagle’s droopy ears which need to be cleaned at least once a week using peroxide.

Do not subject the Beabull hybrid to multiple baths a month, this could curate skin infections and dryness too. A single bath per month will suffice, however, you can still clean its fur with a damp cloth if you feel they’re getting dirty.

The unregulated breeders who are selling outside of the USDA regulations and without a license are what we consider to be “Puppy Mills.” We are committed to offering Beabull puppies who will grow up to become important members of your family. We only purchase puppies from the very best sources, and we stand behind every puppy we sell.

A healthy Beabull has the capacity to live from 10-13 years before its timely demise.

The Beabull is a small-sized dog and as such it grows to maturity between the heights of 12-16 inches.

Their bulldog trait gives them the tendency to be overweight, however, a Beabull can weigh 30-50 pounds.

This breed is so perfect that they can do justice to any kind of home. From families to children to new marriages, singles, to elderly owners, this breed will fit right in.

Beabulls usually come in two colors which could be brown and white or tan and white.

This depends on the generational crossing, however for a purebred Beagle and a purebred bulldog, the traits would be split into equal percentages. However, facially this hybrid looks more like the adorable Beagle.

Their cute appearance and tiny stature.

These hybrids relish stimulating challenges. Their cumulative sensitivity and eagerness to obey makes them very easy to train.

Yes. When trained, the Beabull can understand simple commands.

When they’re in their puppy stage.

The Beabull is a great hybrid that seamlessly complements the features of both parents. They fit into any home in any environment.